ARLINGTON, Va., Sept. 10, 2022 /PRNewswire/ -- StarKist Co., which is headquartered in Reston, VA, and its parent company, Dongwon of Seoul, South Korea, was proud to sponsor a luncheon today for more than 80 Korean War veterans.  The luncheon was conducted as part of the National Chosin Few Reunion, which is being held at the Hilton Crystal City at the Washington Reagan National Airport, September 7-11, 2022.

"The Korean War veterans are American heroes and StarKist is honored to be a part of The Chosin Few Reunion," said Andrew Choe, StarKist President and CEO.  "The Korean War veterans who fought in the battle of the Chosin Reservoir in November and December 1950, fought valiantly to protect and preserve freedom for the United States and South Korea. It is an honor to demonstrate our appreciation for their service and sacrifice."

"It's wonderful that after all of these years the Korean community both locally and internationally have rallied around The Chosin Few to help us commemorate the battle of the Chosin Reservoir," said Colonel Warren H. Wiedhahn, USMC (Ret) and The Chosin Few Chairman/CEO. "It means so much for us that our sacrifices and service during the Korean War are appreciated. We are thankful for StarKist and Dongwon for their support and involvement."

About StarKist Co.
StarKist Co. is a socially responsible company that empowers people to live a healthy lifestyle by providing convenient proteins. An industry innovator, StarKist was the first brand to introduce single-serve pouch products, which include StarKist Tuna Creations®, Salmon Creations® and Chicken Creations®. As America's favorite tuna, StarKist represents a tradition of quality, consumer trust and a commitment to sustainability. StarKist's charismatic brand icon, Charlie® the Tuna, swam into the hearts of tuna fans in 1961 and is still a fan favorite today. StarKist Co. is a direct wholly owned subsidiary of Dongwon Industries Co., Ltd. 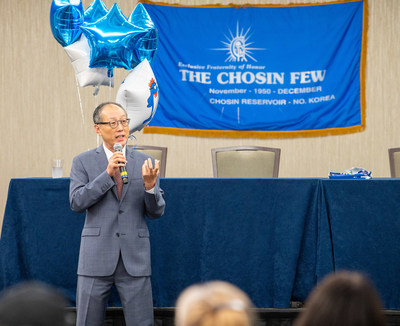